1. Behind the power steering pump, leaks down where intake meets cylinder head. 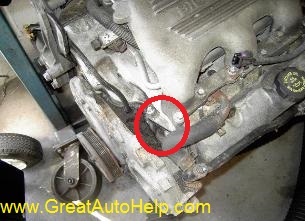 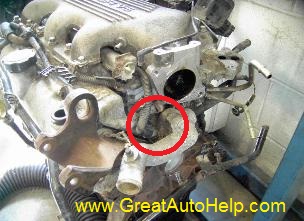 Question: MY 1999 CHEVY BOUGHT NEW HAS LESS THAN 50,000 MILES. JUST GOT THE BAD NEWS IT NEEDS NEW ENGINE. HAD ANTI FREEZE LEAK. I UNDERSTAND IT IS A COMMON PROBLEM. DOES GM DO ANYTHING TO HELP DEFRAY THE COST?
Answer: This is a very common problem, but GM does not offer any reimbursement for this repair.

I had problems with my 3.1 in a malibu and had intake gasket job done for $700. 60 days later it appears to be leaking behind the timing cover? Did they take that apart to fix the intake?
Doing the intake manifold gaskets would have nothing to do with the front timing cover gasket leaking. These are a little common on high mileage cars, but not nearly as much as the intake gaskets.

I HAVE A 2002 CHEVY MALIBU THAT LEAKING COOLANT FAST FROM ONE OF THE PULLEYS. HOW DO I KNOW IF ITS THE WATER PUMP
The water pump is in the lower location of picture #1 above. A small black plastic cover is over the belt on that pulley. Water pumps usually sling coolant over all pulleys. Odds are it is the water pump.

Anywhere besides LIM, head gasket, oil cooler, or cracked head or block that would cause oil to mix with coolant? Or vice versa. Cannot find the leak? Help!
Nope. Nothing else that would cause the mixing.

My car is a Chevy Malibu 1999 2.4L engine and is leaking water almost from the middle what could cause this.
Could be the water pump if it is more toward the passenger side. Or the coolant outlet housing if on the drivers side.

I have a 2003 Impala with the 3400 engine. I have not had the usual problem with the leaking gaskets, probably because I changed the original coolant long ago. However, I seem to have a constant corrosion problem. Heavy Iron Oxide buildup in the cooling system, even with anti-freeze. Any ideas what this may be? I flushed the system less than a year ago and I am currently flushing again after a water pump replacement and I would feel better if I knew what this problem was.
The Dexcool is known for doing that. If you changed the gaskets a long time ago, they may be leaking. No gasket out is a permanent fix. Sometimes they leak internally, slowly and cause this problem. Also the rear headgasket may be leaking internally pushing combustion gases into the cooling system. Remove the #1 spark plug from the passenger side of the rear head and look for corrosion.

Ask A Question For FREE. No Login Required.