When the fuel pressure regulator(1) on the 3.1 and 3.4 engine fails, fuel leaks into the vacuum hose at the top.This condition causes a hard start, long crank time, runs rough when started, and can also cause a stall condition when coming to a stop.

Use these pictures and instructions in the replacement of the regulator. The upper intake manifold plenum does NOT need to be removed. 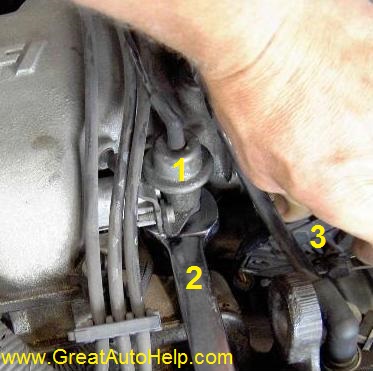 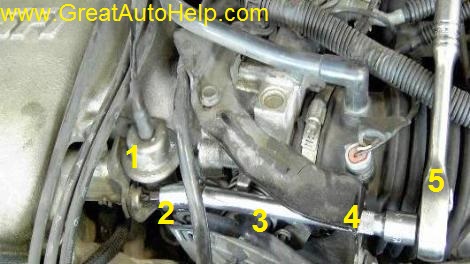 Great info! I think on my 1993 Buick 3.1 the regulator is under the intake tho?
Yes, on the older models the fuel pressure regulator is located under the upper intake plenum manifold.

What should the pressure be on a 2003 Buick Century?
A good rule of thumb is 45 PSI.

I have the 3.1 v6 Chevy Malibu. I took the hose off for 3 mintues, didn't see any fuel come out to suggest a problem. However, whenever the hose is put back on, I can hear humming while I'm sitting in the car with it running. I take of hose, no hum. Strange? Should I replace the regulator. Note: Just did fuel pump 4 days ago because it failed, also did fuel filter and pump relay just as a precaution. BTW, the sound is not coming from the back or the fuel pump, but in the front.
If this is an older 3.1L, then yes, replace the fuel pressure regulator. There was a design change years ago for making noise.