The older theft system on many Oldsmobile, Pontiac, Chevy and Buick model cars is known as the Chip-In-Key. This was used in the early to late 1990's. The correct name for this system is Passkey, or Passkey II.

A very common problem that happens on this system is broken wires.(See Picture Below) This will cause your car to either not crank, crank and stall out after a few seconds, or not crank at all. It depends on when the failure occurs. Sometimes you may notice that the security light comes on now and again while driving with no other problems. Then one day it won't start. Then after a few minutes it will start fine. This is usually because the steering wheel was turned or tilted and the wires touch again enough to let the car start.

There may be codes stored int he computer, but not always. The repair for this is to replace the ignition cylinder. The wires cannot be repaired since they break right where they come out of the cylinder. There be also be a new key with the cylinder. The key will have to be the same chip number as the original. The parts department will have to look up the number by using the VIN number of the car.

GM passkey security system. Common cause for car to not start. Theft / security light on dash. 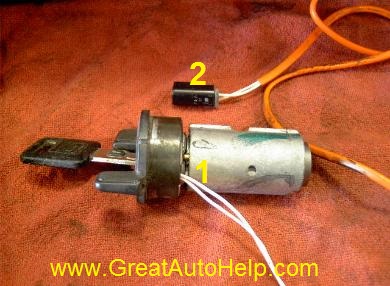 1- Wires for security sensor break here
2- Connector under dr. side lower dash panel to test resistance of sensor with key in ignition. Open circuit means wires are probably broken, and replacement of ignition cylinder is needed.

Question: Ignition wont turn to off position and wont release key.
Answer: This could be a badly worn or bent key, a binding cylinder, or a shifter problem, depending on what type of vehicle this is.

2001 Chevy key is out of ignition truck is still running cant turn truck off
If the key is ion the OFF position, then it sounds like the ignition switch is bad. If it wont go all the way to the OFF position and the key comes out, the cylinder is bad.

I tried to change the stereo in my 2003 malibu and now the car wont start how do i bypass the passkey security lock?
Replacing the radio would have nothing to do with the car not starting, unless you damaged some wiring to the ignition switch or Passlock sensor.

I got home killed the engine and 3hours later tried to start the engine and the starter didn't engage
OK. Going o need more information than that. What kind of car or truck? Is the battery tested as good? Any warning lights on the dash?

Thank you this was a great help, my security light is on and car wouldnt start thank you.

Just had my ignition replace because the car was stolen but don't know if they replace the cylinder try doing the 10-12 minute step n it still wont start but theft light is still on.