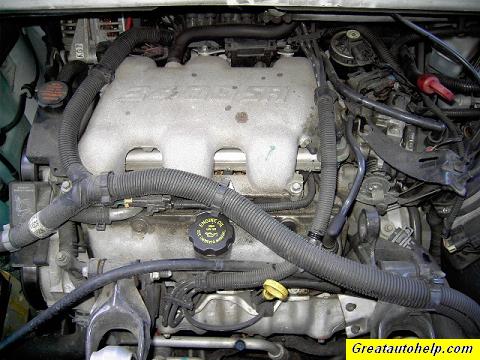 7-8-11: Transmission control solenoid where is it located? -If you are referring to the Pressure Control Solenoid, it is located in the valve body, behind the trans side cover on most front wheel drive GM vehicles.

11-26-11: I have a 3.1 v6 cutlass supreme and noticed the oil changed to a light brown like coffee color, creamer i haven't started the car at all its been parked since any ideas????? -This is called a Milkshake. The coolant is mixing with the engine oil. Have it repaired QUICKLY. Engine damage will occur. Most likely the intake manifold gaskets

1-10-12: I've been having heating problems with my 2001 Oldsmobile Alero with 3.4. I've replaced the water pump, thermostat, and belt, however it keep losing antifreeze and heat. I've taken it to several mechanics telling me that there were different issues each time. The last diagnosis I received was that I may have a cracked gasket. -Yes, you could have a bad intake manifold gasket- very common. Also may have a blown head gasket.

For the post on 12-27-11 the possible reason for not being able to start your car again after getting hot is probably your cylinder valves they are probably not getting compression causing your car to heat up. another reason for this is probably a clogged catalytic converter thus forcing the exhaust back into your engine when experiencing these problems again open your air filter housing and if steam is built up inside this is what is causing your car not to start is the enginenot being able to breath due to hot air heating your engine causing your engine to shut down. -Check for a vacuum leak.

I have yellow and purple connection but don't remember where it goes. It's on the back side next to the fire wall. -Those color wires usually indicate a crank position sensor. They go from the back side lower part of the engine, to the ignition control module.

Will the 3.1 engine in my 1996 cutlass fit in my 2000 malibu? -Yes, it will fit. But you need to look at all the electrical connections to see if they are the same. If not, that would require a lot of work to get i to run right. Also some of the brackets are diferent.

We have a 2001 Pontiac grand am gt 3.4 that is shifting hard in reverse then to drive. Replaced the PCS and now it is shifting harder than it was before. Transmission is fine otherwise. Changed fluid and filter, ran seafom trams cleaner thru it. Still doing it. Now looking at the mass air flow censor. Question is I have been told by several tranny experts that the hose from the mass air flow sensor could have a vacuum leak. Looking at this one in this car and not finding this little hose they are talking about. Any ideas where it could be at? -There is no hose on the MAF sensor. The problem you are having is transmission related, not engine, unless the idle is very high. You may have a valve or valve body problem.

i have a 2004 grandam have replaced wire harness that goes to coil pack alternator the white section on my fuse box. Replaced coil pk and ignition switch and it still wont start. Have turned off security system. -Do you have spark and fuel pressure?

2000 Lumina, 3.1 ENG,92680 mile,changed intake manifold gasket at 86K,new plugs (ac/Delco platinum)new wires, two weeks ago at 92550 mile,it started to hesitate under load,or below 3000rpm,after that it is better,but not much new K&n filter (old one also was K&N,I had extra one )cleaned the MAF sensor,fuel pressure between 47to50 PSI (key on ENG of) same after start the ENG(it won't drop) and vacuum off the regulator goes to 60 PSI(so that is good)no smell of gas nor it is wet (fuel pressure regulator) car idles fine at 800 rpm,it only threw code P0303 (cyl 3 misfire) after I cleared the code never came back but same problem,I only put chevron gas, and fuel injector cleaner(chevron also) every 5k to 8k mile,so injector must be clea ,at 92k I doubted cat be bad,O2 sensor are original(but no code) please help. -A plugged catalytic converter would give a huge loss of power under load. Hesitation under load is almost always ignition. If it did not do it prior to the intake gaskets and plugs/wires, check for a cracked plug or bad plug wire. Especially #3. So why do you think it could not be a plugged or faulty fuel injector? Cleaner does not always keep them clean, and you say ONLY 92k miles? There is no time frame for an injector to go bad. I have had them bad at 13k miles. Brake torque engine to get it to start misfiring and look at ignition components.