Clunk noise in my 2007 Chevrolet HHR or Pontiac G6.
I have a clunk noise in the front end of my HHR. It happens when i am turning the wheel, and also when going over bumps in the road. Most of the time it is when going over a set of rail road tracks. I had the steering and struts checked at a local shop, but they said they did not see anything. Is there a common problem with these cars?

Answer:
By what you are describing, this sounds like a common problem on the HHR, Cobalt, Pontiac G6 and other models 2008 and 2009, with a 'Front stabilizer bar link / arm, or the lower control arm bushing. There is one on each wheel. It connects the lower control arm to the front stabilizer bar. The bar helps control body roll when turning. There is a ball socket joint on the top and bottom of the arm. (See pic below). With the year and mileage, this noise condition would be under the factory warranty, even if this is not the problem. 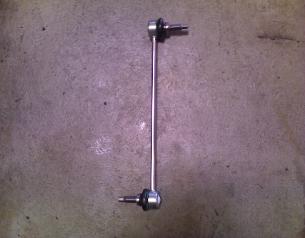 Question:
I have a G6 and my husband drives a HHR. I had a "popping" noise in my G6 last year whenever I would turn the wheel, and it ended up being a lube kit (service bulletin is available for this part and should be covered by GM service shops). My husband has clunking in his HHR when he drives over bumps, railroad tracks, etc and we've been told it's quite possibly the wheel bearing.

Answer:
Most likely it is not a wheel bearing causing a clunking noise over bumps. If the wheel bearing is bad, it usually makes a growling noise that gets louder the faster you drive. If it is bad enough to cause a clunk, you would have heard it making noise for a long time before that. The most probable parts making noise over bumps are the front sway bar end links, or lower control arm bushings. More often than not, both of these are bad together and need replaced. If you can get the car in the air, you can check play in the sway bar end links, and look to see if the front lower control arms are down against the subframe at the rear attaching point. Replace in pairs is advisable for either part.

Mine a 2009 Cobalt. I replaced struts. Fixed problem for a week now clunk is back.
I would check into the front sway bar end links or front control arm bushings. Those are usually the two most common things that cause a clunking noise on your type of vehicle.

HOW DO YOU RESET OIL CHANGE LIGHT AFTER OIL CHANGE.
Either step on the gas pedal to the floor and release- do this 3 times within 5 seconds. Or use the information center buttons. Page to "Oil Life %" then hold the enter button for 5 seconds. See owners manual as well.

I am looking at buying a 2006 G6 and the owner said the sway bar ??? I think bushings need to be replaced. What would be the average cost to replace these if I brought the car into a dealership or shop?
Replacing links or link bushings at a dealer will probably run you about $200 including parts and labor. You may want to check the front control arm bushings as well, as those are known to fail on the HHR models too. Estimate for that is about $40 with a front end alignment. Any of these problems will make a clunk or knock noise over bumps or while turning, like a metal to metal sound.

I'm going on my 3rd replacement of rear bushings on my 2007 HHR with 70000 miles on it to fix the annoying clunking over bumps. Obviously there is a problem with the design, cheap parts or both!
Sounds to me like you are either having cheap parts installed, or the job is not being done properly.

My 2007 Chevy HHR, and i hear the clunking sound when i go over bumps and turning the steering wheel. The auto tech said that this is the steering shaft making this noise. WHY would it do this?I never heard this sound in any car or truck i ever owned. Bad Design i guess.
Yes, bad design that has been re-designed several times.

I have a 2006 Pontiac G6. All dealer maintained. What a joke to say that because it appears that the dealers mechanics have no clue as to whats been causing the horrible clunking in the front end and my traction control light to go on. My car has 51,000 miles and has had this ongoing problem since 300 miles. I have been told turn rotor so I repalced them. Told steering column rack and pinion, front stabilizers, control arms, bushings, you name it they have replaced it. The mechanics cant figure it out so they replace parts already replaced. I was told today that repairs would be $1,500 to replace both front control arms and the stabilser links. The TRAC control light is the standard cam shaft sensor. This is absurd. How can GM sue the company making these parts but not issue a recall??
Recalls are really only for a safety related item. The only thing you may be able to do is call customer assistance, complain, and ask for help to get these fixed for free since it is an onging problem.

I have a clunking feel when reversing in my 2007 pontiac G6 can it be a motor mount or transmission problem.
Yes it could be either but more common is the stabilizer bushings.