Question:
My 2006 Saturn Ion has a weird noise in the front end.

When i hit bumps like going up or down the driveway, there is a clunk under the car. I cannot tell if it is on the passenger and driver side. It seems to come from both side in the front end depending on how I hit the driveway, or which way i am turning the steering wheel. Sometimes the noise rattles and others it clunks.

Even when i turn the wheel back and forth while driving at say 5 MPH. Sort of rocking the Ion side to side. I had a mechanic look at my car and said he could not find anything loose in the front end to make this condition.

Can you help me fix the problem with my Saturn Ion, or at least give an idea of where to look. Thanks !

Answer:
See pictures below. Sounds like you are describing a common problem on this Saturn, as well on many Chevrolet and Pontiac cars around the same model year.

Either the front stabilizer bar links are worn out - but the mechanic said nothing was loose, or the lower control arm bushings are worn. This causes the control arm to sit on the frame and cause a clunking noise when hitting bumps or going over railroad tracks, or rocking the car as you described. See the pictures below for this. Looking between the rear of front wheel and the fender you can see a worn bushing compared to a good bushing.

These can be replaced separately from the control arm. The parts are only about $20 each, but the control arm needs to come off, then the bushings pressed out.

1. Bad / worn out bushing. No gap between the control arm and the frame. 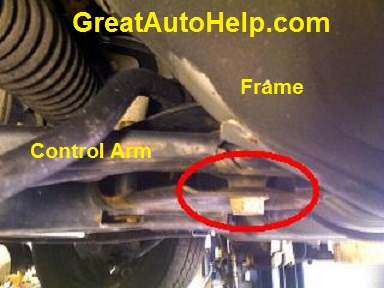 Question:
Hi please help. Do i really need a torque wrench to replace a front wheel hub/ bearing and if i do what size do i need. Also i need to replace both sway link /or could i just change the bushing please also tell me about the torque size or if you think i could do them with a regular ratchet. Thank You very much for Your Advice. Chevy Cobalt. No ABS. Engine Size : 2.2 Ecotec.

Answer:
No, you don't necessarily need a torque wrench to replace the front hub bearing assembly. Most tightening specs on cars do have a torque value, but unless it's a real sensitive area, such as cylinder head bolts, you can use a regular ratchet and common sense. Usually an impact wrench can be used on all the bolts/nuts on the front end and suspension. You'll need some strength to get the axle nut loose and even the hub bolts are very tight, so an air gun comes in handy there.

On reassembly, just pay attention to tighten everything evenly and tight. As for replacing the sway bar links, the entire link must be replaced. If you are asking about the bushings on the frame that are not part of the links, then yes you can just replace those alone. The bushings don't have to be changed unless they are bad too. These are not as common as the links.

I had my Chevy Cobalt front end stabilizer links replaced on my 2004 Saturn Ion over the winter, the car was quiet for awhile, now the noise has come back in just a few short months. Why???? I am taking it back into the repair shop tomorrow morning. What else could it be? Thank you.
It could be the front sway bar end links again. Depending on your driving style, and things like road hazards, the life of the new links is really up for grabs. A few good sized potholes and there they go again. On the other hand, the Saturn Ion is also known for front control arm bushings going bad. They usually start to separate from the rubber and that lets the control arm move around excessively and bang and knock as you drive over bumps and turns. Those are the two main things that go wrong in the front end of your car, but make sure to get it looked over good. There are many other things that cause noises in the front end when they go bad, such as the struts, tie rod ends, ball joints, etc.

I've got a 2003 ION Sedan. Front end clunking has been nuts. I replaced the control arm bushings since the old ones were toast after 1 year of use. I used Prothane bushings as a replacement - the design of them was completely different, and they were poly bushings so much stiffer than the cheap rubber ones. They are no longer a problem, and it solved the wheel hop issue but the clunking noise remains. I checked sway bar links, bushings, all OK. Shocks & struts are new too. Running out of things to check.
You have replaced everything that would cause a clunk when driving. If the noise is when turning and stopping at the same time, you may have an intermediate steering shaft clunk.

My 2006 Chevy Cobalt makes a clicking sound when I turn into a parking place,I disconnected the brake caliper and removed brake pad long enough to test and noise is still there,I also changed drive axle,hub bearing and ball joint now my alignment is bad and noise didn't go away.
Check the bushings in the pictures above. Also check the stabilizer links and upper strut mounts.

Thanks for this info I'm felling like I'm getting closer to the problem and I'm not gonna take it to the dealer, ill do it myself thanks again 2008 HHR panel.

Thanks, like most people my control bushing look good but I you can pry the rear bushing up and down almost to the point of contacting the frame, I also see signs of darker areas of rubber that indicates that the bushing are torn. This looks to be a poor design for this application of a rubber bushing

Big help!!! It pays sometimes to just sit and read.