Power Steering problem with my 2006 Chevy Equinox. Many dash lights on dash GM Computer codes = many. Repair work done prior jump started because dead battery.
Work done to repair this problem = nothing.
Question:
My Equinox has no power steering. It is very stiff. The service stability light is on. Check engine warning on dash. Many other indicators on as well. This all started after we had to jump start the battery because my son left the key on for a long time. Did a computer blow up? What can i do to fix it. It does start and run.

Answer:
See pictures below. This is a common problem we have been seeing with these vehicles, as well as the Pontiac Torrent, Chevy HHR, and Cobalt. Improper jump starting causes the main 80 or 100 amp fuse to blow. This causes the powers steering, ABS, and other computer to not have power - and therefore do not function. See pics below for the main fuse location.

Check this fuse with a test light just like any other fuse. Improper jump starting will also cause codes to be stored in many of the other on board computer, and may cause 1 or more to fail and need replacement. A scanner with LAN capabilities is need to scan the computer for codes and further diagnosis to determine if any of the modules are damaged. 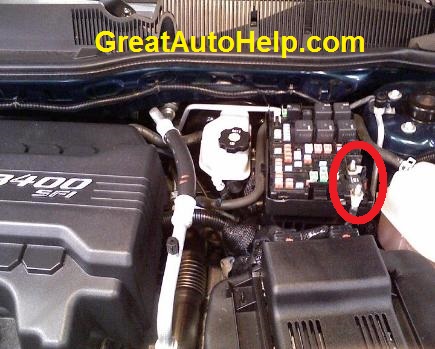 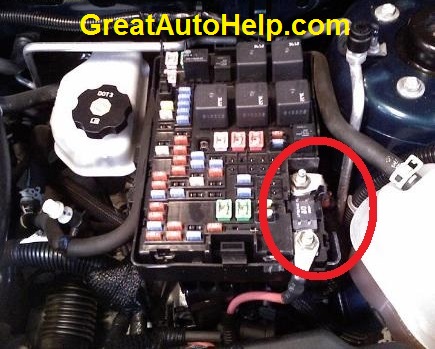 Answer:
Sounds Like Possibly a Body Control Module (BCM) problem. The BCM controls many electrical functions of the Equinox, including the theft, and door locks. Be sure to check all fuses. Other than that, a scan of modules data would be needed to diagnose the problem.

So, this weekend i was driving and the power steering went out in my 2006 Equinox. I did nothing to the battery, i was just driving. Since Chevy did a recall on the Chevy Cobalt do you think they will do the same for the Equinox since it is the same exact issue? As for the blower door--they also should do a recall on this issue too! I will love my truck but now it is just sucking the money right out of me!! Will never buy a Chevy again!
This is not the same steering issue with the Chevy Cobalt. The heater A/C door problem will not be a recall since it is not a safety problem.

I keep blowing dash lights fuses and brake light fuses.
You say blowing fuses- which fuses are blowing. There are several different ones for these 2 different circuits.

I have a 2005 chevy equinox. The driver's door will not lock/unlock with the remote...all other doors will. The interior lights will not go on when opening the drivers door but will with all other doors. The radio will not turn off with the driver's door but will when other door are open. Any ideas on how to fix this? My equinox has only 39,000 miles and also had the head gasket blow in November. Chevy would do nothing for me even though the mileage was low! I will NEVER buy a Chevy again!!!
All these problems are related to the driver door locking problem. Check for broken wires in the rubber passthrough between the body and the door. Open the door, pull on the that rubber boot while working the locks to confirm that there are broken wires, or slice it open and you will almost surely find broken wires.

My 2005 Chevy Equinox and none of the tail lamps, dash lights, or yellow lights in the front will work when the headlights are on. There are no blown fuses. Was wondering if there might be a relay I'm not looking at or what else there could be?
There is a fuse and a relay for the parking lamps in the fuse box on the right side of the console. You can find which ones by reading the description on the cover. That would also control your dash lights as well. If neither of those are bad, you could possibly have a faulty body control module, or a wiring problem. That would need some deeper checking into, probably by a technician.

2007 Equinox, my power steering has gone out. Replaced the fuse. Dealer says it is the electric power steering motor....I'm looking at some used ones with a year guarantee, is the actual motor the only thing I need to replace?
That all depends on what is wrong with the system. If the dealer says it needs a motor, then i can only agree since i have not looked at the Equinox.

I have a 2006 Chevrolet Equinox. I had got a car wash today and when I was leaving I heard the power steering click on and off a few times than finally it went completely. I can not even turn my wheel. I have not had to jump start my vehicle for any reason, could this be just as simple as a blown fuse or do you think it sounds worse? I am glad I was close to home and not on the freeway as I had my kids in the car with me and I was trying to turn when it went out.
Check the fuses, but it does sound like a steering motor problem. Only way to be sure is to have the system scanned and diagnoses.

I to have had issues with my power steering going completely out. I found that if i hit some 'potholes' it will come back on. It also does do clicking sounds too. With this many complaints, wouldn't you think this would be a safely issue to do a recall? I have NEVER heard this on another vehicle before. I do have low millage on it also. I have brought it in to a mechanic and they do something to the fuses, maybe resets them? It does work for awhile, but wouldn't you think if its the power steering fuse, once it goes out, its out?
Your problem isn't the fuse, and yes if it was out, it would be out until replaced. It sounds like you have either the power steering control module or power steering motor failing. These are both part of the lower column on your Equinox. This system is purely electric, and has no hydraulic assist as most other cars do. Once you lose power steering, it is gone. It would be best to get it checked out because your system has probably set a trouble code that will help in diagnosis. Most likely you will need either one or both the module and motor replaced.

If the engine is not cranking, then it could be a bad starter motor. Sometimes they act on and off like this. If it is cranking but not starting, may have a fuel pump going bad.
You need a new battery sir this happened to me yesterday.

2007 Chevrolet Equinox, and the power steering went out! I checked the maxi-fuse and it is still good. Any other suggestions? I really can't afford a huge car expense right now. Thanks.
Could be a faulty steering columns, motor or module. Would need the computer scanned for codes as a first step.

2006 Chevy cobalt service air bags lights on no power steering heater doesn't work mileage wont show up where do I begin.
First thing to do is check all the fuses. Especially the main fuse under the hood. See pictures above.

I have numerous electrical problems and other problems The passenger window will not go down. The heat only blows cold air. The car makes squeaky crunchy noises when it bounces and when i turn the wheel....what next.
OK. Check the wiring in the harness that connects the door to the body. It is inside that black boot you can see with the door open. Common to have broken wires in there. Possibly have a broken temperature door for the No Heat in Chevy Equinox. For the noises, check the stabilizer links and bushings on the front end.