Question:
My check engine light came on a few days after I had an oil change. Had the computer scanned for codes at Autozone and came up as p0171 lean, and P0496 evap system purge or something. What are some common causes for this. 2005 Chevy Equinox. Check engine light P0171 and P0496. Repairs done prior = Had an oil change. Had the codes scanned at Autozone.

Answer:
The code p0171 is a common code to turn on a check engine light after an oil change on this vehicle. If the oil change facility checked your air filter, then most probable cause for this code is that they have accidentally disconnected a vent tube. This tube goes from the air intake duct on the air filter housing, to the rear valve cover under the ignition coil / module. (see pic ) Just reach under coils and plug the hose back into the top of the valve cover. P0496 is described as "Evaporative emission system purge during non-purge event" (EVAP) This is usually caused by a faulty purge solenoid. Under the engine cover, on top / passenger side of intake manifold. 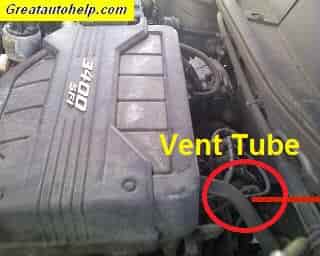 Airbag Problem 2005 Chevrolet Equinox. Codes = B0100, B0101. The airbag sensor is lit on my Chevy equinox. The dealer checked it and told me that the front airbag sensor needs to be replaced (code B0100 and B0101). Can you tell me where I can find this sensor in my vehicle so I can change it myself ? Also, do I have to buy this sensor from GM since it cost 450$ I would like a cheaper alternative.

Answer:
The front end impact sensor is located on the underside of the upper radiator support. Open the hood and look under the support. 1 TORX screw holds it on. IMPORTANT: It is left handed treads.

Cant figure out how the hose connection is held on possibly a clip got the breakdown from gm parts on mass air flow sensor tube only calling them for valve cover breakdown later.
That EVAP tube is not held into position with anything. It's routing under the ignition module and the rubber grommet in the valve cover hold it in. But when it gets moved as stated above, then it came loose.

I recently took my equinox in for Texas state inspection and the car did not pass due to several sensors being off line. Evap, O2 sensor, and EGR system. All with Not Ready reading. I have recently changed the battery however this has been over 300-500 miles ago. I have called several dealers and they suggest more driving. This seems very odd.
These tests take very specific conditions to run. I would agree that more driving is needed. Get on the highway at a steady speed for at least 10 minutes, come off and sit at a stop for a few minutes, turn car off and do it again, etc. Test will not run if there are ANY codes stored in the computer. This does not mean the check engine light is on. There could be codes stored in history with no light.

Code P0455 is that the sensor on top of gas tank?
Code P0455 is a large EVAP system leak. That could be caused by several things. A gas cap that is loose or not sealing, a bad vent valve, broken line or the fuel tank pressure sensor (that is on top of the tank).