Question:
Before the switch just light on. After the switch truck started running rough with the heat on. Now it cuts off if the heat or air is on. I can drive it as long as heat or air is not on. 2005 GMC Envoy check engine light codes p0128 and p0410. So far a coolant temperature sensor has been replaced.

Answer:
See picture below. Code P0128 is described as- Coolant temperature below threshold. The most common cause for this code on the GMC Envoy and Chevy Trailblazer is not the coolant temp sensor, but rather the thermostat. They tend to stick open, so the antifreeze is constantly running through the radiator and getting cooled, not allowing the engine to get hot enough. The computer looks at this and sets the code because the engine did not get warm enough as expected as compared to amount of time it has been running. This code will not cause the truck to stall. 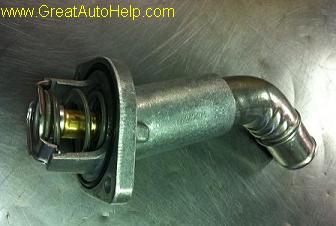 P0410 is for the Secondary Air Injection system (A.I.R). This is an emission system. It pumps air into the exhaust. This will also not cause your truck to die out. A common problem for this on your vehicle is either the pump has sucked up water and has failed, or the air diverter valve on the side of the engine has failed.

For the running rough and dying out- most likely just a throttle clogged with carbon. With A/C on the compressor puts a load on the engine, and the computer cannot compensate to raise the idle a bit. Many times when you have the heat on, the compressor is also on. A cleaning of carbon from the throttle body will cure this problem. You some Seafoam or carburetor spray on a rag and wipe down the throttle and blade. Also spray it rel good.

Then take it for a good ride doing some hard acceleration to sort of Blow It Out. If the idle is now too high, try letting it idle for a few minutes, shut key off, restart and drive again. If it is still too high, an idle relearn with a diagnostic scanner will be needed.

Question:
I have A 2000 Chevy Blazer that was running great the me and my brother went fishing. Shut the truck off then had the high beams on over the lake and the radio we tried to start it but it just flooded smelled like raw gas… and now the engine dosen't turn over at all. All the fuses are good and we sprayed ether in the one thing thats hook to air filter for gas its hooked to gas peddle can u help me please.

Answer:
Sounds like you flooded the engine with gasoline and either caused a hydro-lock condition where the engine will not turn over due to the cylinders being full of gas, or you've finally run the battery down enough it won't power up the starter. If it really smells badly of gas, I'd shoot for the first one.

You might want to try removing the spark plugs to see if they are fouled out, and if raw fuel comes out of the hole. If so, remove all the of the plugs and with the ignition disconnected, turn the engine over either by hand or with the starter. Just be sure to disable the ignition or you'll have a large fire on your hands. Replace the spark plugs after the cylinders have dried and try to start the vehicle again. If the battery is dead, replace it as well.

Question:
I have a code for secondary air injection but it works fine i can command it on and off and can here it while its running turning on and off as needed. What is causing the light? Thanks for the help. 2001 chevy blazer. Check engine light p0410.

Answer:
Just because you can hear the pump running does not mean that the system is functioning properly. If the air is not getting into the exhaust, then the oxygen sensors will not see the change, therefore it is not working correctly. That is how the computer checks system operation. When the pump runs and air is diverted properly, that will cause O2 sensor to go lean. Then the computer knows the A.I.R. system is working.

We had problems on that year Chevy Blazer were the diverter valve or solenoid went bad. You will need to check the function of those. Easiest to get at from under the front of the truck after taking off the splash shield.

Get Our E-Book Filled With Great Information