Problem with my 2001 Oldsmobile Aurora 3.5L. I replaced secondary air injection pump with new GM part and 2 wire connector to fix a GM P0410 code check engine light is still on after being cleared. Wondering if there is some fuse or wire that could be blown from the air injection pump connector being melted? I have seen this on one other occasion and was not able to repair the problem. The injection pump relay is ok.

These two valves get stuck and do not allow the air from the pump to enter the exhaust. The valves are silver, and have small tubes running into the exhaust manifolds. They have 1 vacuum hose on them. One is above the belt, near the firewall, the other is near the dr. side of the front valve cover. Use a vacuum pump to see if the valves hold vacuum after making sure the solenoid is supplying vacuum when the AIR pump turns on. 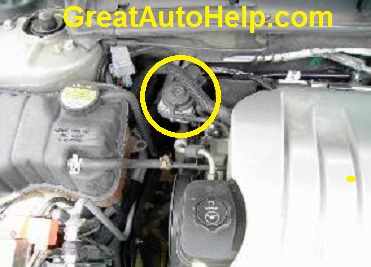 The PCM controls the ground. Testing for vacuum out of solenoid must either be done at the solenoid, or if doing at the diverter valves, both valves must be disconnected, and plug 1 off while checking the other. Then plug the other, and check the first. If you just pull a hose off one valve and check for vacuum, and the other valve is bad, the vacuum will all go to the bad valve, and you will not get any at the valve you are checking. It does sound like the valves are bad. They should hold vacuum. A way to test that is to jump the pump relay so it comes on, engine at idle, use vacuum pump at 1 valve. You should hear a definite change in the sound of the pump when vacuum applied then released if the valve is working.

Where is AIR system for my Chevy truck located?
The system has many different parts. If you are looking for the air pump motor, it is located down by the transmission. There are also valves, pipes, solenoids etc.

A.I.R. system working goes through a check i have replaced both check valves vacuum lines ok cannot get it to pass the i/m for emission testing.
If you mean the system is functioning, but the computer won't run and pass the I/M test. There are very specific parameters that must be met before ECM will run the test for that code. Highway driving with the A/C off will usually do it after a few days.

I have a 2000 Olds Intrigue. Engine light is on. It usually takes a few moments to start and will often shut off after several seconds or a couple minutes. After that it runs very well. Any ideas?
Get the codes scanned. I bet you will find a code for the crank position sensor. Also check the fuel pressure regulator(FPR) for leaking.

After having my transmission rebuilt I have this trouble code up po410,what could be the cause?
There could be many things that may have happened. They left something unplugged, blew a fuse, damaged the pump. The pump is located under the drivers side wheel well.

Recently obtain the same fault codes on my 2001 Olds Intrigue it has 70,540 miles on it and i have two fault codes P0410 Air Injection System and P0742 TCC Stuck on could either of these faults be related? I have some knowledge on cars but having these two codes leaves me to believe a open or short circuit condition may be occurring as well as a circuit relay being defective if anyone has a clue i would prob get some sleep thanks.
These codes are not related. The P0410 may be because of the problems stated above. P0742 is most likely internal to the trans. Solenoid or burned harness.

I own a 2002 Oldsmobile Aurora 3.5L. went to bed one night running fine get up the next day and the check engine light was on brake light and the abs light and the ts light someone please help.
OK. Scan the computer for the check engine light does, then we can help you. The ABS, brake and Traction may all be related to low fluid level in the reservoir. Check that. If it i fine, you will need to have the ABS computer scanned as well.

I have a 2000 olds intrigue, 3.5 with only 60000 miles on it, In one the other questions, there was mentioned a grounding issue that could possible cause a intermittent problem shifting with the trans. I went to two different trans / mechanic shops, I told me it had to be rebuilt at a cost of $2000. The other mechanic shop said he ran the diagnosis thru his snap- on computer system and found no codes and test drove it with his hand held plugged in but found no problem? Can this ground be the issue ? Can you tell me how to resolve it ? I personally changed the oil and the trans filter, but I was told that doesn't replace all the oil only the pan oil. Thanks for any advise.
Yes, replacing the pan gasket and filter only gets about 5 quarts of fluid. The ground could cause trans problems, but usually will cause the A.I.R. pump to quit also. The ground is on the frame near the pump. Several black wires.

Sometimes when i start my 2001 Olds Aurora 3.5' the tranny wines and shifts very hard almost like it has a shift kit. i stop car and turn off ignition then start up again. Sometimes this fixes problem but sometimes i have to repeat several times before it fixes problem. Any ideas ?
There is a known problem with a ground wire to the transmission. It causes the tranny to work intermittently and gives a trouble code.